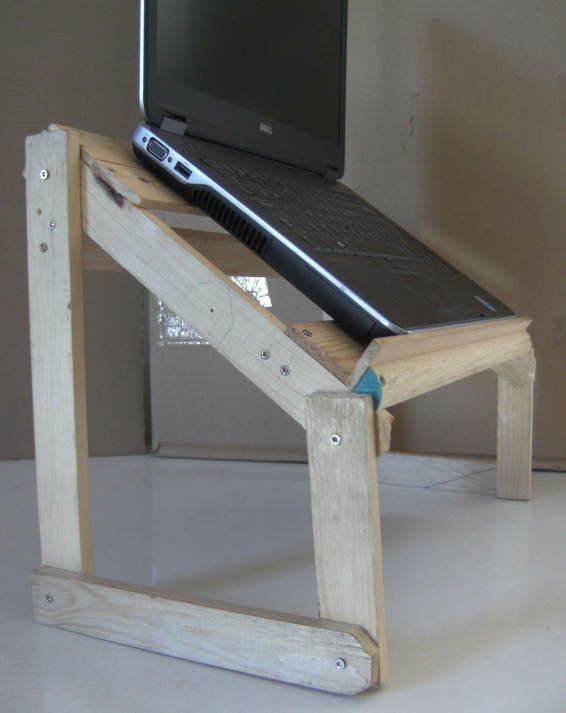 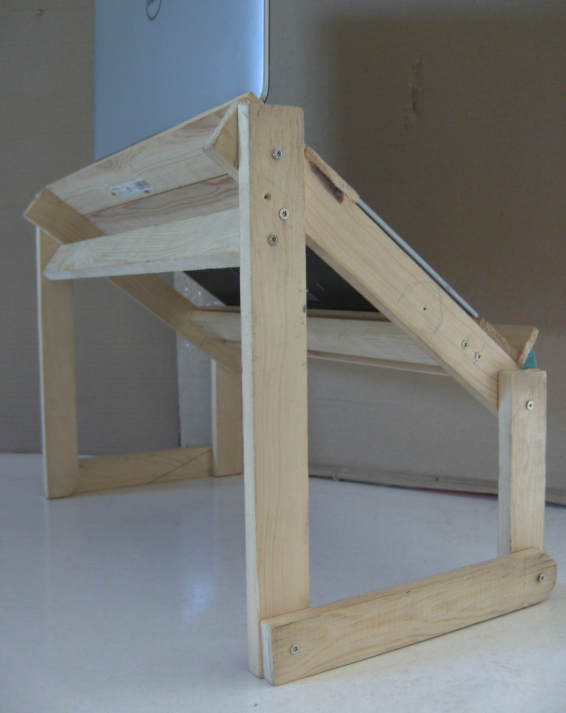 When the latch disappeared from an ancient wrought iron front gate, I asked a metalwork company to look at the gate and make a replacement latch. A lever latch is about as simple a device as can be imagined. Knowing where it needs to fit, how could anyone get it wrong? Yet the first replacement didn't work: with a decorative curling handle, the centre of gravity was marginally on the wrong side of the fulcrum, causing the latch to rest in the open position.

That was an obvious mistake, you might think. But here's a test: without looking at one, try to draw a diagram of a can opener in sufficient detail for someone to physically reproduce it.

Most of us pay far less attention to the physical world than we think, which can make designing and constructing even something as simple as a laptop stand an interesting exercise. In contrast to supposedly infinitely-malleable software, the material world is one of unyielding constraints and undeclared possibilities. And when working with simple tools, there is no one to blame for that badly-thought-out third-party UI or API you're obliged to use.

It will be obvious that I'm not a carpenter, but if building with wood appeals to you more than casting some plasticky thing with a 3D printer then the stand design here might be something you can adapt or improve. I say "design", but it was developed according to an Agile Methodology, so pretend that I've lost my blueprints and go by the pictures.

Above, the stand is seen standing, but it is adjustable, so it can also kneel or crouch: 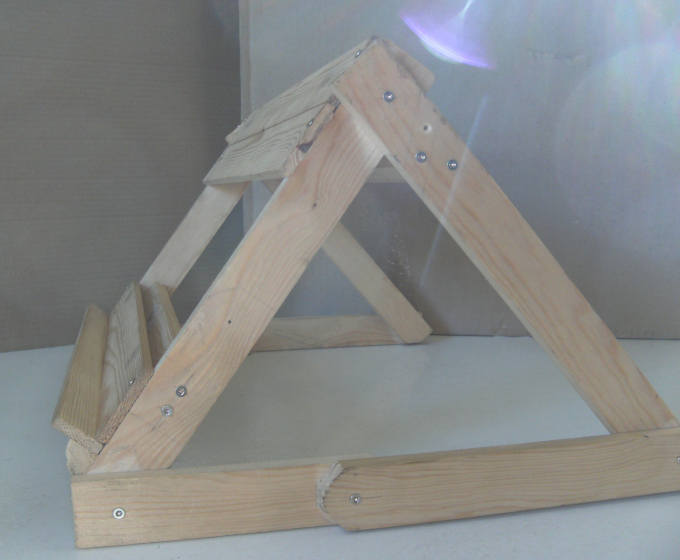 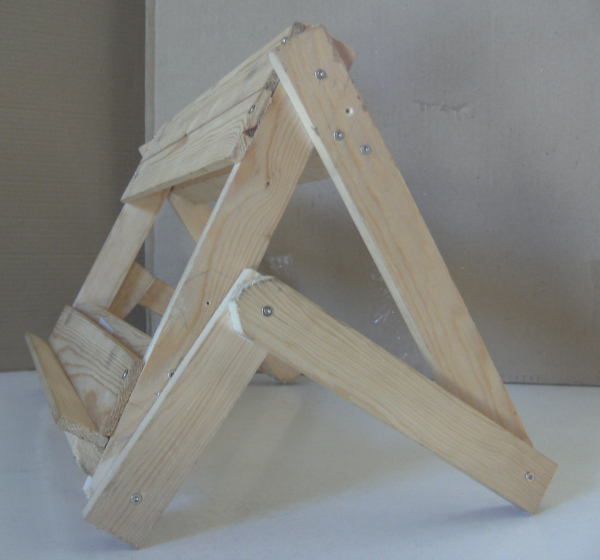 The shelf that supports the laptop (or book, or painting-in-progress if the stand is used as a desk easel) fits in a gap at the bottom of the tray, so it can be pulled out and replaced with a deeper or shallower one. Also, the size of the quad moulding can be chosen so that it will support an ultra-thin laptop without any shelf being present. 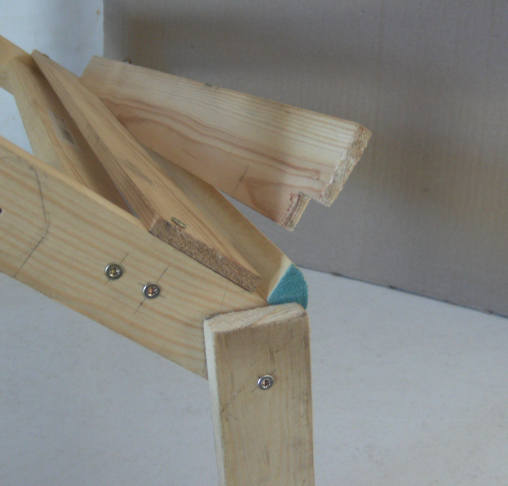 Make and use this stand only at your own risk! I will not be responsible for a hole drilled through your palm, your laptop tumbling onto your mother-in-law's Ming vase, or any other misadventure. There may be errors or omissions in the description.

Wood, in three cross sections: 6mm x 44mm for the tray's slats and shelf, 16mm quad moulding for the bottom of the tray (the end of which is blue in the picture above), and 12mm x 34mm for the rest.

Wood screws (24). In length, at least 16 screws need to be about double the thickness of the thicker pieces, or a bit less. I used 25mm screws, 1mm over that 2 x 12mm limit, but the screw heads are not flush with the wood (to use the jargon of the trade, I didn't "countersink", except for the two screws fixing the quad moulding to the tray) so, despite being marginally too long, the points do not protrude.

Drill. To drill pilot holes for the screws.

Ideally, a mitre saw. There's no need for a fancy electric one, a hand-held one is fine, with a box or something to hold the wood steady while you saw it. I couldn't find the mitre saw I used to have, so I settled for an ordinary saw, making the result a bit rough.

For me, the wood above came in 2.4m lengths. How many you need will depend on wastage, as well as on whether you decide to alter the tray width or other dimensions.

Tray slats and shelf: 4 x 430mm. Or 5 for two swappable shelves for different loads. More slats are possible, but unnecessary: the gap is good for a laptop's fan.

In the elevated position, the tray cannot roll backwards, i.e., it cannot close the angle it makes with the back legs. That's because the base of the tray is hard against the crossbeam between the back legs. For a view of that crossbeam, see the picture at the top of this page showing the back of the stand.

But what stops it rolling forwards? Notice in the picture below that the front legs are not quite vertical, but instead lean back a little. The downward pressure of the load holds them that side of vertical unless the tray is deliberately pulled forward to collapse the stand to the lowered position. 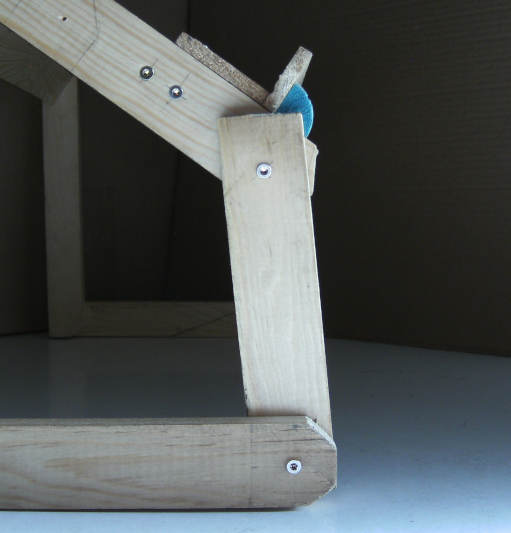 One way to ensure you get this right is to do things in this order: fit all the legs to the tray, then fix the crossbeam so that the back legs are vertical when the tray is against it, then finally cut the stretchers at a length that will make the front legs lean back slightly.

By now, it's probably clear that what makes the stand adjustable is the fact that the screws which fix the legs to the side of the tray are rotating with the legs, and the same is true of the screws fixing the stretchers to the legs. I knew that this could work because I previously did it when making a collapsible saw horse from some waste lumber. I have never seen it done anywhere else, so it's probably unorthodox at best, and might not get a carpenter's approval. However, it's simple and it works. It may be that the wood is being worn by the movement of the screws, but I've seen no evidence of that to date. 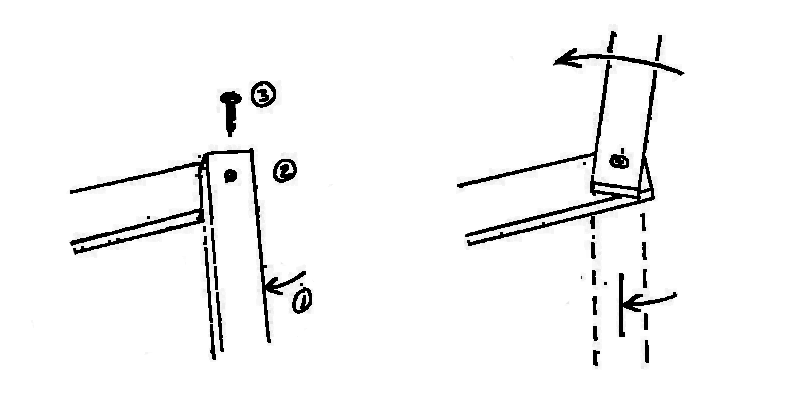 It can be convenient to drill the pilot holes with the two pieces held together in a different relative rotation, and only after that to rotate the upper piece to its maximum required clockwise position, align the holes again, and put in the screw.

An alternative approach I've tried is to insert a thin piece of card between the pieces before screwing them together, but it can be difficult to get the card out afterwards.

The crossbeam in the tray adds some rigidity to the tray, though it might not really be needed. It's near the bottom of the tray only because it served a dual purpose in an earlier iteration.

To assemble the tray, I first screwed the top slat and quad moulding to the tray sides, ensuring the sides were straight. Then I allowed the shelf to rest against the quad moulding and fitted the bottom slat against the shelf before fixing the slat in position with two screws - making the shelf snug, but not so tight that it could not be pulled out.

You will see that I rounded some corners. Then I decided that I didn't need to do any more, at least until I find that missing mitre saw or buy another one.

Most people will prefer a design with an adjustable tray angle and will not care about the possibility of elevating the tray. In fact, using lockable joints, it would be possible to have both these features. I had to take care to get a tray angle and elevation I would be happy with. In the collapsed position, however, either the base takes more desk space than I would like or, if folded tighter, the angle of the tray is a bit steeper than I might wish. For me, that's not a problem, as I already have a metal stand for that use case.

On cognition and carpentry (and Haskell and other things), John Salvatier has written a perceptive article: Reality has a surprising amount of detail. Credit for the can-opener test goes to Taylor Pearson, who references Salvatier. I passed that test, but probably only because mine is a lower-tech can opener than the rotary one he assumes everyone has.